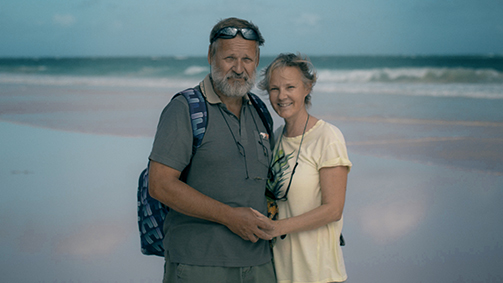 This is how our relationship began

In July 2011, Alwin resumed membership of Parship, and he was no longer willing to throw even more money into these dating sites on the Internet. So he hid his e-mail address in his profile and let the matter rest.
The NEVERLAND, on which Alwin worked as a skipper for several years, sailed from Turkey to the Canary Islands in September 2011 to spend the winter time there. On this sailing trip Ferdinand, the owner of the NEVERLAND, and Alwin anchored a night in the outer harbor of Rethymno in Crete, almost on the doorstep of Christine. But Alwin and Christine did not know each other then.
In October 2011, by chance, Christine found Alwin’s profile at Parship and was immediately interested. She wrote his profile but received no answer.
That just could not be the case! She wentogle and googled and found out that some partners of partner portals hide their e-mail addresses in their profiles when they no longer want to actively pay. So for a while she searched very hard for Alwin’s profile and found the hidden e-mail address, which she immediately wrote down. Alwin was very surprised and answered immediately, because of course he was interested in who could have solved his puzzle. This is how a lively e-mail exchange developed.
But the distance was too big and you could not even meet around the corner for a coffee to meet in person. In addition, Alwin could not leave the NEVERLAND alone at anchor to fly to Crete. Finally, curiosity increased, and Christine resolutely booked a flight from Chania to Crete, where she had been living for over 30 years, to Las Palmas de Gran Canaria, where Alwin was anchored in the harbor with NEVERLAND. Christine landed in early February 2012 directly in the carnival time and stayed for 10 days.
She fell in love with Alwin and was pretty sure she would love to love this interesting life on a sailing ship by his side. So they were now intensely emotionally connected, but there was no opportunity for further meetings. In March 2012 NEVERLAND sailed to the Cape Verde Islands, and in April Alwin sailed alone with her across the Atlantic to Martinique. Immediately after arriving in the Caribbean, Christine booked a flight from Crete to Martinique and landed there in early May 2012. This time she had booked for four weeks to get to know Alwin and this unknown life on a ship. With every day her resolve matured and at the end of the time she was pretty sure.
Exactly at this time Alwin discovered the sailing catamaran PERLE, owned by Doris and Jürg, who were thinking of selling the ship. Alwin immediately showed strong interest. He had always dreamed of such a ship in recent years. Christine was also excited about the very spacious and modern catamaran. With a very good feeling, Christine flew back to Crete, quitting her apartment and working at a local television station, selling or giving away anything she could not take with her, and preparing to move to the Caribbean. Alwin sailed at this time with the NEVERLAND to Trinidad / Tobago to spend the hurricane season there.
As early as July, Alwin received word from Doris and Jürg that they were now determined to sell their PEARL. Immediately a provisional contract was concluded over the Internet and the purchase was sealed.
Christine came to the NEVERLAND in late August 2012 with a one-way ticket and all her film equipment to Tobago. At the end of the hurricane season, they sailed back to Martinique with Ferdinand and took over their new home, the PERLE. Doris and Jürg were still actively helping with the work on the PERLE so that we could bring the ship into the water very soon.

We live together now a life, what many of you dream.